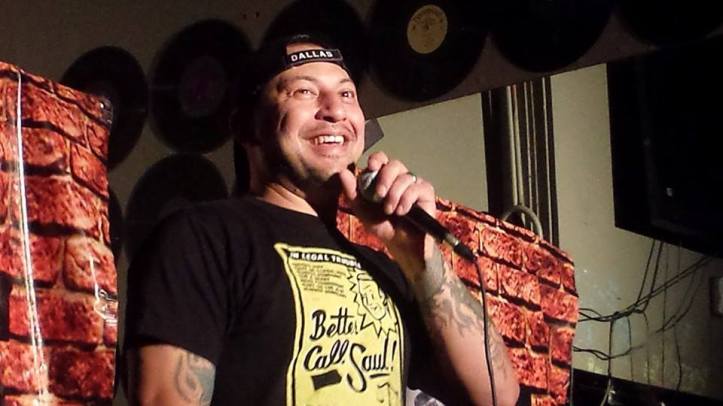 Going to a bar alone on a Tuesday night is unheard of in my world. I don’t go out much anymore because I’m 33 years old, my son needs help with homework, I sometimes work late and my boyfriend doesn’t care for it anymore. However, spending a few hours this past Tuesday night at Coconuts was a fun and different experience for me and others there.

I’m glad I met new people and spoke with some of the up and coming local comedians at the bar’s weekly “Comedy Tuesdays” show. I believe some of these comedians are funny enough to become mainstream if they desire it. The show and comedians made me realize why I love El Paso so much and came back in 2008. Local comedian Jerry Karnes ‘El Malkreado’ (a bad boy) and his crew took me back to my childhood and past life situations through some of their skits. The comedians did a great job of interacting with the audience. What I enjoyed most was the comedians not heckling the crowd too much. I strongly dislike it when you sit in the front row and a comedian starts picking on you, especially if it’s in a negative manner. However, none of the comedians here did this. Whenever the comedians asked or made comments towards a fan, there was always something positive being said.

I immediately saw the crowd interact and get excited when the subject of clubbing in Juarez came up. The crowd started shouting ‘drink and drown’ and the names of former nightclubs. My favorite club in Juarez at 18 years old was Copa Cabana A.K.A. Copa. Thursday nights in Juarez were known as College Night and/or drink and drown back in the 90s and early 2000s (possibly before). For only 10 bucks you could drink all of the alcohol you wanted at Copa during College Night. Some clubs even stayed open until 3 a.m., and sometimes later. During my college years circa 2000, my friends and I drove from Las Cruces to El Paso (about 45-minutes away) and parked in downtown El Paso. After parking, we walked/crossed the bridge into the Juarez strip. After the clubs, we’d go out to eat a late dinner/early breakfast at Chico’s Tacos or Taco Cabana and head back to New Mexico State University.

Before the show began, I had a great opportunity to sit down and talk with ‘El Malkreado’, founder of El Paso Underground Comedy and Comedy Tuesdays at Coconuts. Comedy Tuesdays began at Coconuts in 2010. ‘El Malkreado’ has done comedy since he was a child. We spoke about his past, life in general and his future career goals. ‘El Malkreado’ is humble and we meshed well. He, like me, is a die hard Dallas Cowboys fan so how can I say anything bad about the guy? Karnes used the Cowboys in one of his skits. The skit caused the crowd to go wild and comment on whether or not they liked or hated them.

“When I was a kid I would practice making faces in the mirror. I was in gangs and my friends (homies/homeboys) called me Jester because I was always making them laugh, the central El Pasoan said.” Karnes thought of beginning a rap career with funny lyrics when working at a local ambulance company that no longer exists. He eventually realized comedy was his passion all along. Karnes isn’t afraid to admit he’s been in trouble with the law for probation violations and drug-related incidents. Karnes said he’s spent time in jail.

“Something positive will come out of every situation especially when a lesson is learned, he said.” “I make friends everywhere I go.” Karnes said he’s been staying out of trouble lately for his family’s sake.

“I want to reach a new height in my career where I can put my kids through college, keep my wife happy and buy a new liver, he said with a chuckle.”

Karnes takes part at other comedy shows around El Paso. He enjoys helping up and coming comedians get their name out there and get onstage practice. He also participates in local charity events at times. Another event Karnes participates in on Fridays is the 8 Mile Talent Show at Plush Bar, 4808 Dyer. The talent show is open to new comedians, musicians and poets. The winner goes home with $100.

“We do different and stupid things and try to have a twist to it.” For more info on his show, you can check it out at: http://www.jerrysjoint.com/ Karnes also has several videos on You Tube. Besides being a comedian, Karnes works as a graphic artist.

Don’t be surprised if you see Karnes on national TV someday. He plans on submitting a 90-second video of his stand up comedy to NBC’s “America’s Got Talent” in upcoming months.

“If I make it great, if not oh well,” he said. Aside from performing at clubs around town, Karnes has performed in Los Angeles, Odessa and Inn of the Mountain Gods Casino in the past.

Carlos, a regular at Coconuts, says he enjoys watching Karnes and his crew perform because of their style of comedy.

“He (Karnes) makes fun of himself. He’s called himself a little slut. He also talks about Austin and Bowie (high schools), UTEP and EPCC (El Paso Community College).” Carlos said Tuesdays usually have a good turnout.

Although I enjoyed most of the jokes from every comedian, Sam Butler, a Northeast El Pasoan, joked about being broke and doing the walk of shame. I thought the joke was hilarious. Butler joked about going to the Coinstar at Walmart to cash in all of his spare change. I’ve been there and done that so I can relate. Butler performs around the country and at various El Paso clubs.

I also enjoyed having conversations with comedians Al Lara and Butler towards the end of the show. It was also great having a conversation with Chris DeBord after his performance. For more info, check these guys out on You Tube and/or Facebook.

There is no cover charge to attend the 21 and over “Comedy Tuesdays” shows. Drink specials are also available.