A Letter to Me 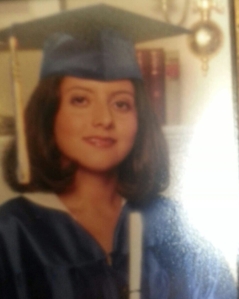 I’ve wanted to write a letter to my younger self for some time now. I was inspired by fellow blogger and friend T. Wayne’s blog post. Check out his letter here.  I’m 18 years old and a senior in high school in the above photo. The photo was taken in 2000.

I have to say you’ve done pretty well for yourself. I’m not saying you’ve done everything perfectly but…I’m proud you aren’t locked up or in heaven. Since this photo was taken, you’ve really come out of your shell. You’re no longer the shy girl everyone once knew in school. Although you’re still reserved, you’ve come a long way from the girl you once were.

I’m glad you were able to finish college four years after high school. Your grades were decent. They would’ve been better if you wouldn’t have partied and smoked so much! I knew you had to get it out of your system. What were you thinking when you went to drink and drown on Thursday nights in Juarez? You should’ve been studying! I know Juarez wasn’t as dangerous as it is now but still! You could’ve gotten locked up over there! Remember the mace the cops would spray in the air when all of the clubs closed? Remember when you would cross over drunk? Luckily, your friend was sober enough to drive you back to campus. You shouldn’t have driven when you were so drunk from time to time! Luckily, your Guardian Angel was watching over you because you could’ve easily become another statistic.

I’m proud you did Air Force ROTC and became the news editor of the student-run newspaper at New Mexico State University. You were very close to becoming a second lieutenant in the U.S. Air Force but you missed that wonderful opportunity. You got your dream job as a reporter a couple of weeks before graduating. I also know you didn’t want to leave your son’s father behind either. Did you really think you would stay with him forever? I think you did.

You should’ve listened to your family when they said he was bad news. Grandma said to leave him when he went to jail for the second or third time. You stood by him when nobody else would. You supported him because you truly loved him. I think you eventually realized it was over when you moved with him and Jacob to Albuquerque. I know you thought you were in love with other men while you were with him but they were just distractions. They were just escapes from reality. I’m glad you finally decided to leave him after seven years. I think you knew deep down in your heart he was cheating on you and doing who knows what else. You let it slide time after time because you truly loved him. You loved him for the ‘man’ he was and because he gave you a beautiful son. I’m glad you didn’t take him back after he begged you to for years. Like they say, an ex is an ex for a reason.

After him, you didn’t always date the right kind of guys. What the hell were you thinking with that loser a couple of years after him? I’m glad you got rid of him because he was also bad news! I can’t believe you loaned him your car and gave him money to pay his bills! He also stole thousands of dollars from you! I can’t believe he wouldn’t give up on you until recently! You finally settled down with a good one. He takes care of you and your son. Of course, he isn’t perfect but he’s a good catch. He’s even taken you and Jacob on trips. He took you to Disney World for the first time. He took you to the Grand Canyon. He’s helped you out a lot in the three years you’ve been with him. This one is finally a keeper!

I wish you wouldn’t have stopped writing for five years. I’m glad you’re back at it now. I think writing is your true passion and calling in life. I think you need to continue with it whether it’s in your blog or elsewhere. I know you’ve always wanted to write a book since you were little. You’re 34 years old so you need to start on that soon. I know you’ve had other jobs but you eventually turn back to writing. Don’t turn your back on it anymore. Keep on moving forward, Lisa. Like I said, you’re doing alright for yourself. Take care! Remember to stop and smell the roses more often! Don’t forget to travel the world either. Don’t let work or anything else get in your way. I love you girl! Always stay strong!