Hi everyone! I hope your Wednesday was great! I had a long and busy 12-hour day! I’m extremely grateful for having the opportunity to see the Pope’s open air mass. If I had the opportunity to do it all over again, I would do it in a heartbeat. I considered going to Juarez but it was already too late. I would’ve needed the press credentials several weeks ago. I was fortunate enough to receive press credentials for two parks in El Paso yesterday. There wasn’t a lot of action when I showed up between 8:30 and 9 a.m. I decided to leave and spend my day at the University of Texas-El Paso’s Sun Bowl instead. 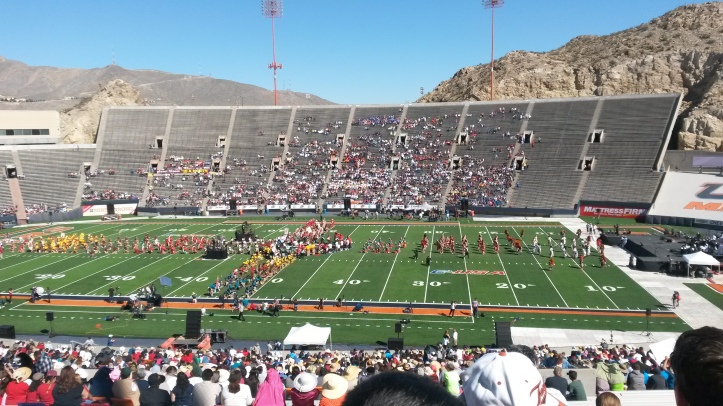 I had a great time observing the people at the Sun Bowl. People were extremely humble and excited to watch Pope Francis live from Juarez. I had the opportunity to walk around and join around 28,000 for some live performances and a two-hour mass. The performances included Tigua Indian Dancers, mariachis from El Paso’s Bowie High School, matachines (Native Indian dancers from Mexico) and religious musicians. A headline performer for the viewing party was Tony Melendez. Melendez overcame a lot of adversity in his life. He was born without hands or arms. He is a musician who sings and plays the guitar with his feet. His music and story were uplifting to listen to.

Pope Francis had a very busy day today. Today was the last day of his five-day trip to Mexico. Besides Juarez, he visited Mexico City, Chiapas and Morelia/Michoacan. Prior to the afternoon mass, he visited Juarez’s Colegio de Bachilleres (a public high school) and Cereso Prison. After he took a break, he gathered and blessed around 500 immigrants along the US-Mexico border and Rio Grande.

The mass was beautiful and made me tear up from time to time. The Pontiff said it was OK to cry and let out all of the pain and hurt one encounters in life. Juarez has encountered its share of pain in recent years due to the drug wars and bloodshed. The Pope said these problems need to stop. Pope Francis’ main theme of the afternoon mass was change is always possible at anytime. It’s up to each individual to do it with a plan of action. He said one should always forgive and love their enemies. He would also like for El Paso and the world to continue praying for Juarez. About an hour after the mass, he flew back to Vatican City.