Some of El Paso’s Art, Murals

Hi everyone! I hope you’re doing well! The other day I was inspired by a post about murals by fellow blogger Jim. Jim writes about what’s going on in his life on a daily basis. Check out/follow his blog if you aren’t already.

El Paso has quite a few murals around town (At least more than 50 if I had to guess). The other day I took a few photos of the murals at the Chamizal National Memorial in central El Paso. I was in the area because I was taking a test for a job nearby. I’m crossing my fingers I passed! Here’s a few photos and history about the “Our Heritage” murals and Chamizal.

“Our Heritage” or “Nuestra Herencia” Murals

The “Our Heritage” murals blends the variety of cultures of people who live along the U.S./Mexico border. Carlos Flores painted the 18×120 mural in 1992. The mural is four panels. It includes: Mexican heritage, Native Americans, Spaniards and Mexico today. The mural also honors President John F. Kennedy and Mexican president Adolfo Lopez Mateos.  President Lyndon B. Johnson is also included. The Chamizal National Memorial commemorates the peaceful settlement of a 100-year-old border dispute between the United States and Mexico. The dispute over land was finally settled during Kennedy and Mateos’ presidency in 1963. The U.S. returned most of the land to Mexico. Mexico transferred part of the undisputed land to the U.S., a portion which was set aside for the Chamizal Memorial. Chamizal opened in 1973. For more info., click here or here. 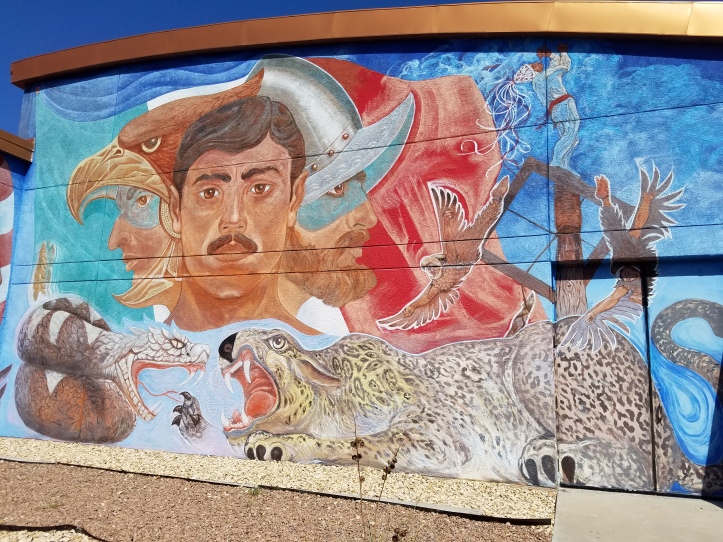 Local artist Hal Marcus’ painting/mural is inside the Chamizal Memorial. It’s 14×10 and uses oil on canvas. The painting was dedicated on Nov. 21, 1993. Marcus said about the painting “This painting is my imaginative scenario of El Paso’s first Thanksgiving. I tried to convey the celebration of life that makes this theme the cultural banquet that it is. It’s a poetic vision.”

“In 1598, nearly 23 years before the Pilgrims landed at Plymouth Rock, a large group of Spanish colonists rested from their hard march northward and gave thanks along the banks of the Rio Grande long before there were borders. They feasted with the Jumano Indians who greeted them. This scenario is my dream with all the spirits, archetypes and imagery of Mexico past, present and future in El Paso.”

“El SOL (the sun) is the gloriously golden Sun Carnival Host gazing at us with the eyes of perception and ageless beauty.”

Take care everyone and I’ll see you soon!